Okay, so some background…

For several years, my main exercise was swimming. Actually, it’s been that way all my life. I started swimming competitively at age six and continued to do so until I was 18, with year-round workouts at 6 a.m. and 5 p.m. almost every day. After that, I competed in triathlon and, in college, water polo.

I do not (like most people) have a swimming pool at home. Which is why, during the pandemic and the resulting gym closures, I took up mountain biking again after many years. It was short lived, as I dislocated my shoulder after about the third ride. I was out of cell range when it happened. I walked my bike out five miles with my shoulder in the wrong place, and I drove myself to the emergency room in my stick-shift truck with one viable arm (more about that in a minute).

It turns out I tore my labrum, which is a rather important piece of cartilage in that it keeps your shoulder where it’s supposed to be. As a result, I had surgery in December to repair it. I’m still in physical therapy, trying to get it back to a semblance of normal.

My shoulder situation is relevant for a few reasons, but primarily because it’s generally ideal to use two hands when driving…particularly if you insist on driving a manual transmission vehicle.

Drive it until it dies

About trucks, then. I drove my mother-in-law’s hand-me-down 1997 Toyota Tacoma until it reached 250,000 miles. I loved that truck, and still do. It’s with my sister now. 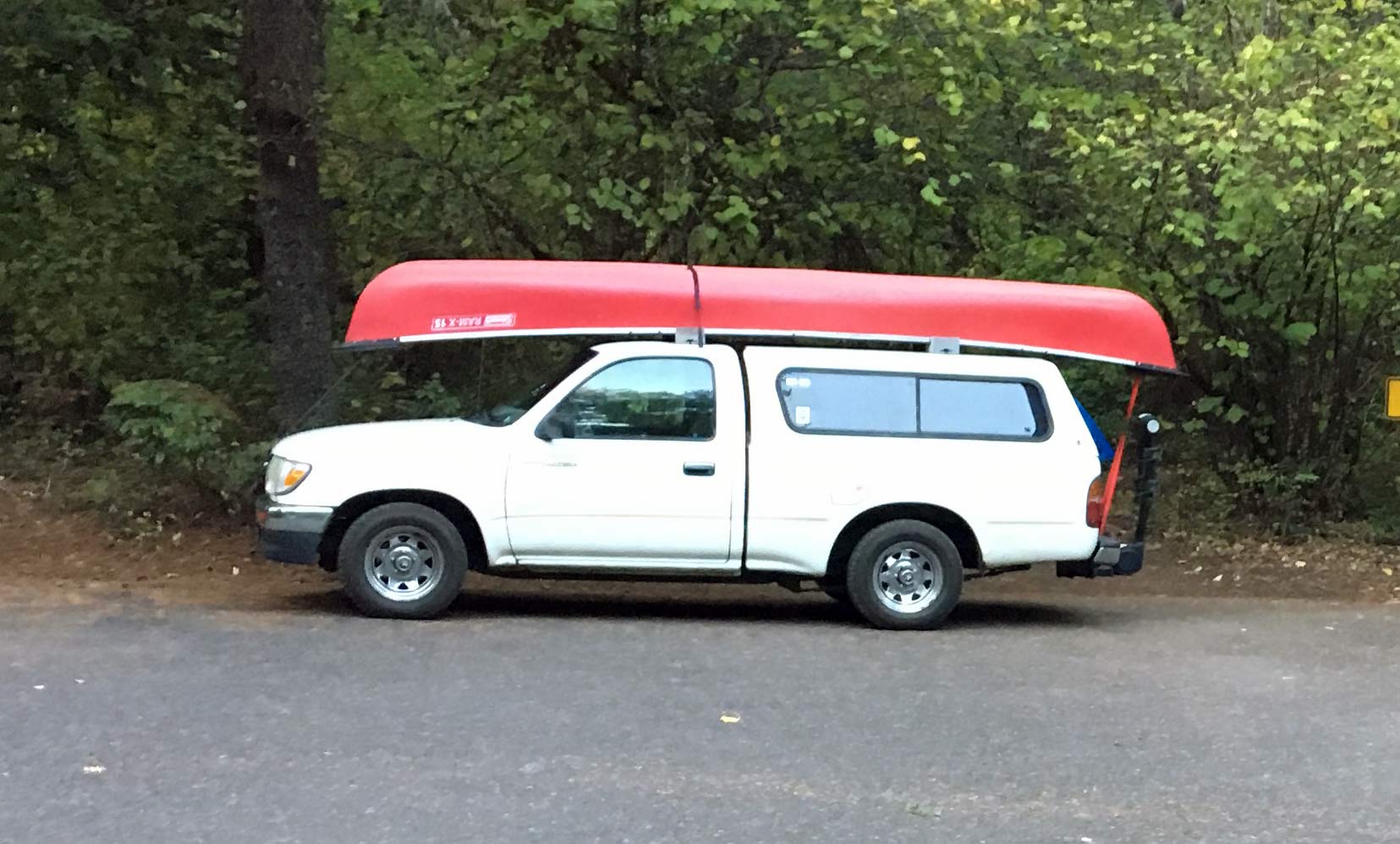 I only parted with that pickup because it was 2-wheel drive. When we moved to the country in 2018, I thought we needed a 4-wheel drive vehicle (that turned out to be true, especially during this climate event). I didn’t drive that Tacoma until it died, but honestly, I’m not sure it will die. It will likely outlive me.

I prefer to drive a vehicle until it dies. I know there’s a lot of momentum around buying an electric vehicle, and I would like to do that, but I think it’s better to use a thing—vehicle or otherwise—until it doesn’t work anymore. I realize this is subject to debate, and I have that debate in my head constantly. (Side note: instead of new electric vehicles, it would be great if the government would subsidize retrofitting existing vehicles with electric crate motors because, in part, what a waste of viable material to buy new cars when the non-petroleum parts work just fine! But I digress.).

My requirements for a 4-wheel drive alternative to my beloved Tacoma were…unrealistic. And yet I stuck to them.

This impossible criteria eventually yielded a craigslist post for a 2003 Ford Ranger that had largely been towed behind an RV. And that’s how, in 2018, I found my truck.

I’ll admit to being a bit of a truck fanatic. I buy all the Overland Journals. I watch launch streams and obsess over things like the Ford Bronco + Filson collaboration. I know it’s stupid and environmentally destructive, but I really like trucks. And I try to buy as few of them as possible, while also fetishizing them. 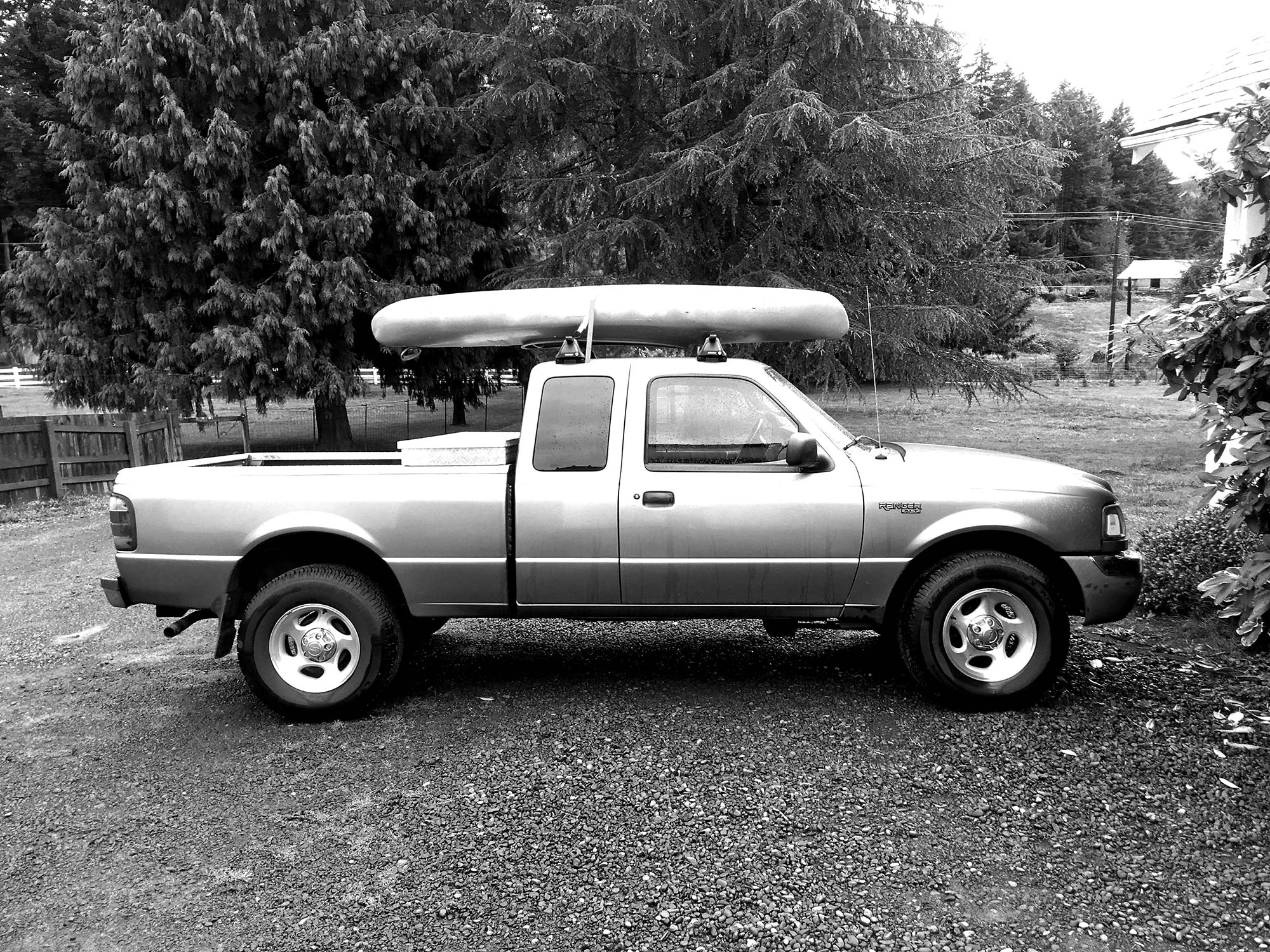 I obviously don’t own a Brodozer, as do several of my fellow SAR members. No judgement (mostly)! There are times when I want a big ol’ truck. My physical therapist just abandoned his tiny, broken Subaru for a giant new Tundra. I’m envious, to be honest. But I’m okay parking next to it and admiring it from there. For now.

My old Ranger gets me from place to place, albeit at a measly 17 miles per gallon. Despite that, I love this old little truck. Well, I mostly love that I don’t make payments on it, but I also love how simple it is. I’ve recently contemplated making it less simple, either by adding a lift kit and big tires, or an OVRLND camper, or a Softopper (still considering that one), or trailers, bed kits, bed frames, roof tents, and a lot more.

I do sometimes envy my friends with bigger trucks when I try to pack this truck for search and rescue missions. My truck is small, and has a constricted cab and leaky toolbox.

Would I like to have this truck I saw in a parking lot the other day? Yes. But the grass is always greener…or black-Ram colored. Whatever. 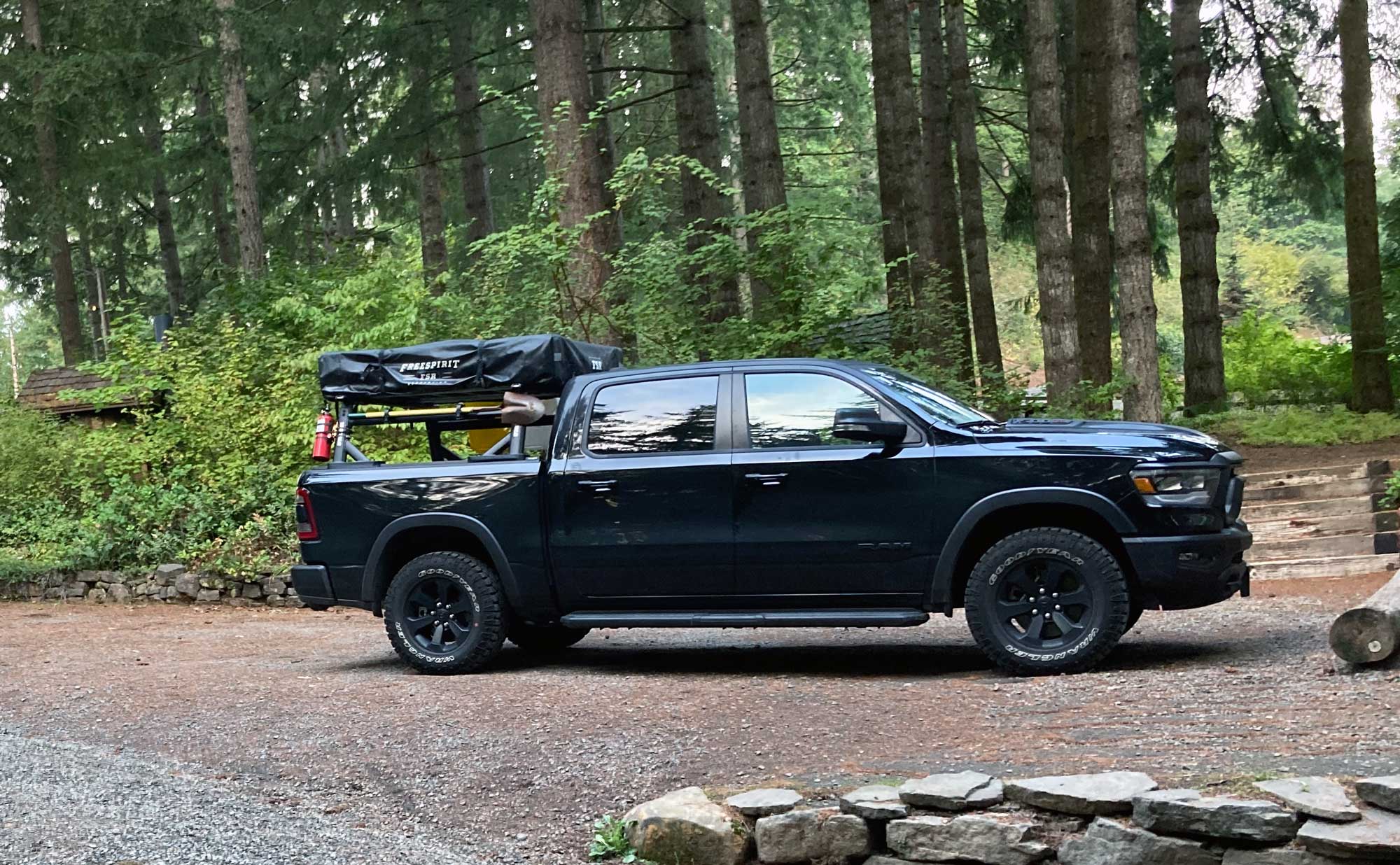 I’ve previously posted about our SAR gear requirements. The requirements have changed since then, and while those changes have made the core pack lighter to carry, the end result is an increase in overall required gear (the required list now includes snowshoes and micro spikes, among other additions) and auxiliary kits that are, instead of being integrated into the pack, required to be present for a mission; that is, they must be in the vehicle.

So my simple truck needs to become a SAR truck somehow.

This would be easier if, for example, I could outfit my rig with something like Decked. But, unsurprisingly and understandably, new kits mostly only fit the new Rangers.

And so here I am, old human body, old Ranger body.

Let’s use what we have. 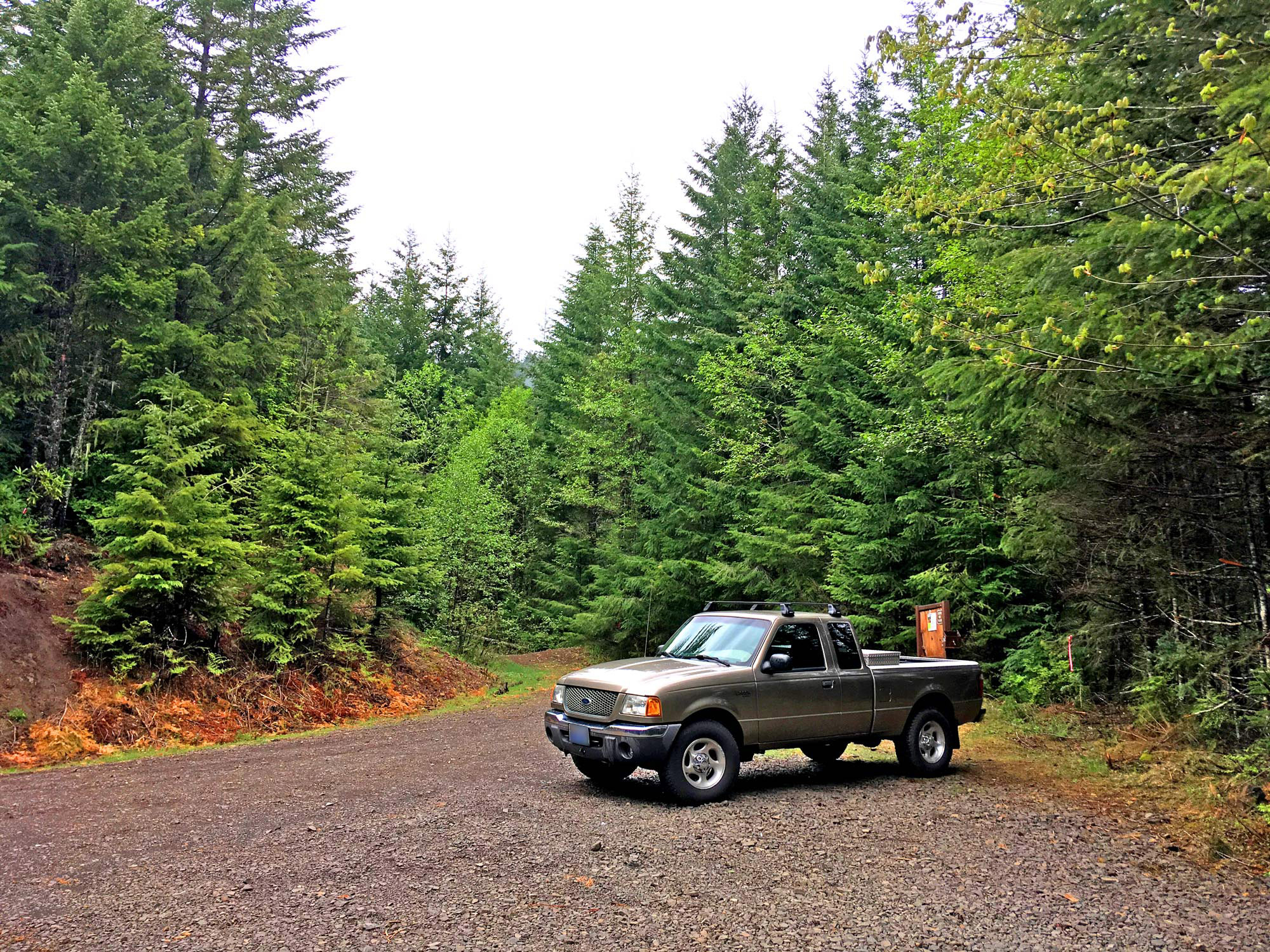 The ranger came with an old toolbox. I have to feed that sucker WD-40 constantly, but it more or less works for its purpose, and it’s secured with a lock, which is important given the quality of gear I carry. I haven’t added the Softopper, in part, because I haven’t found an ideal way to secure my SAR cargo.

I like my old toolbox. It’s just shitty enough to be kind of cute. It also simply works, which is the point.

Today, I finally reorganized it. I picked up a couple Wolf Packs, which fit my toolbox perfectly, and reorganized both my truck support gear and SAR gear. It was long overdue, but there’s work yet to be done.

I’ll admit that I let my toolbox get out of hand. It was a riot, actually. I like to keep the extended cab mostly free for my dog, and I just kind of let the precious toolbox storage embrace its chaotic self. 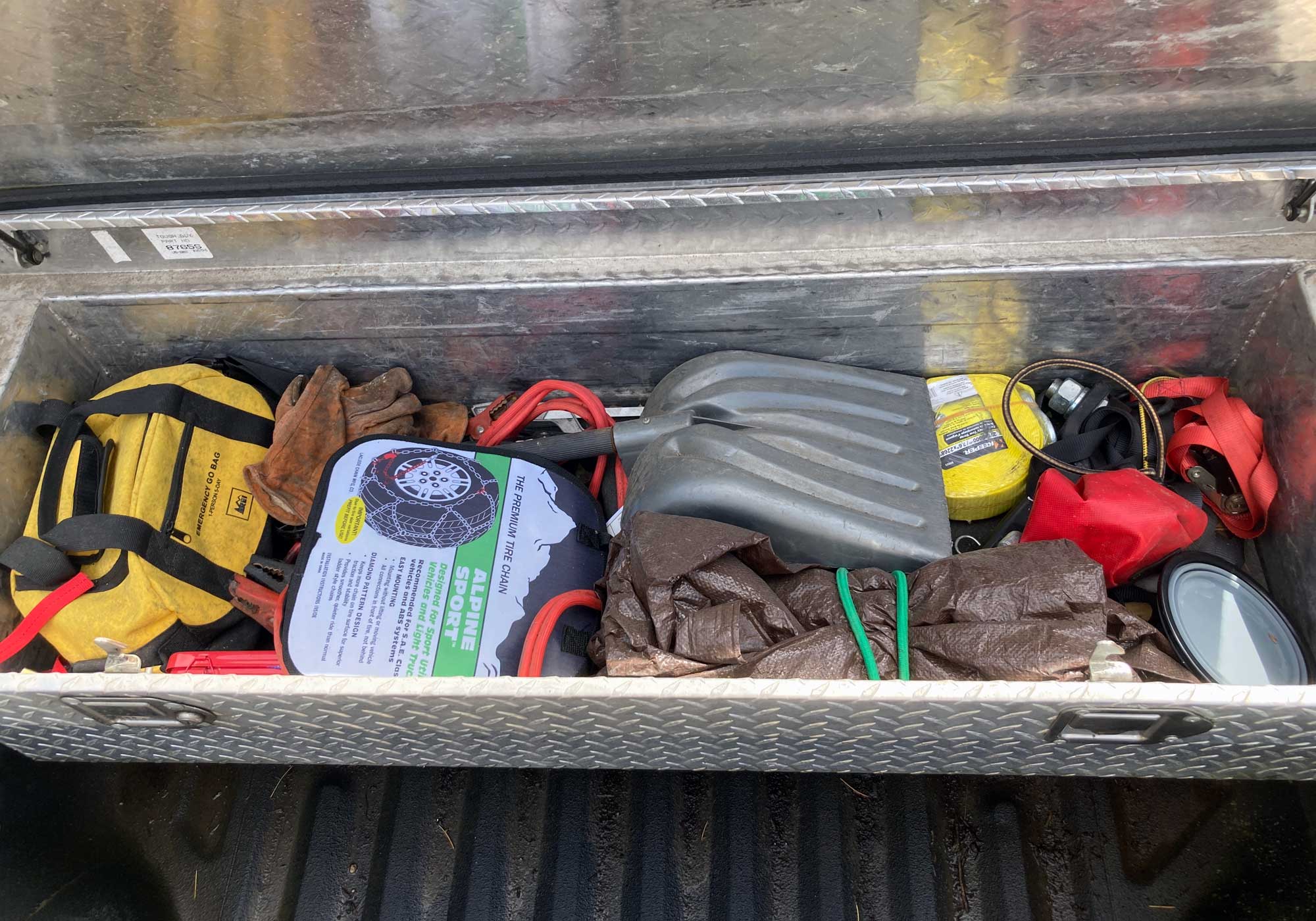 It was a mess. With the new SAR equipment requirements, I knew I would need to carry more gear in my toolbox. I had to compartmentalize. 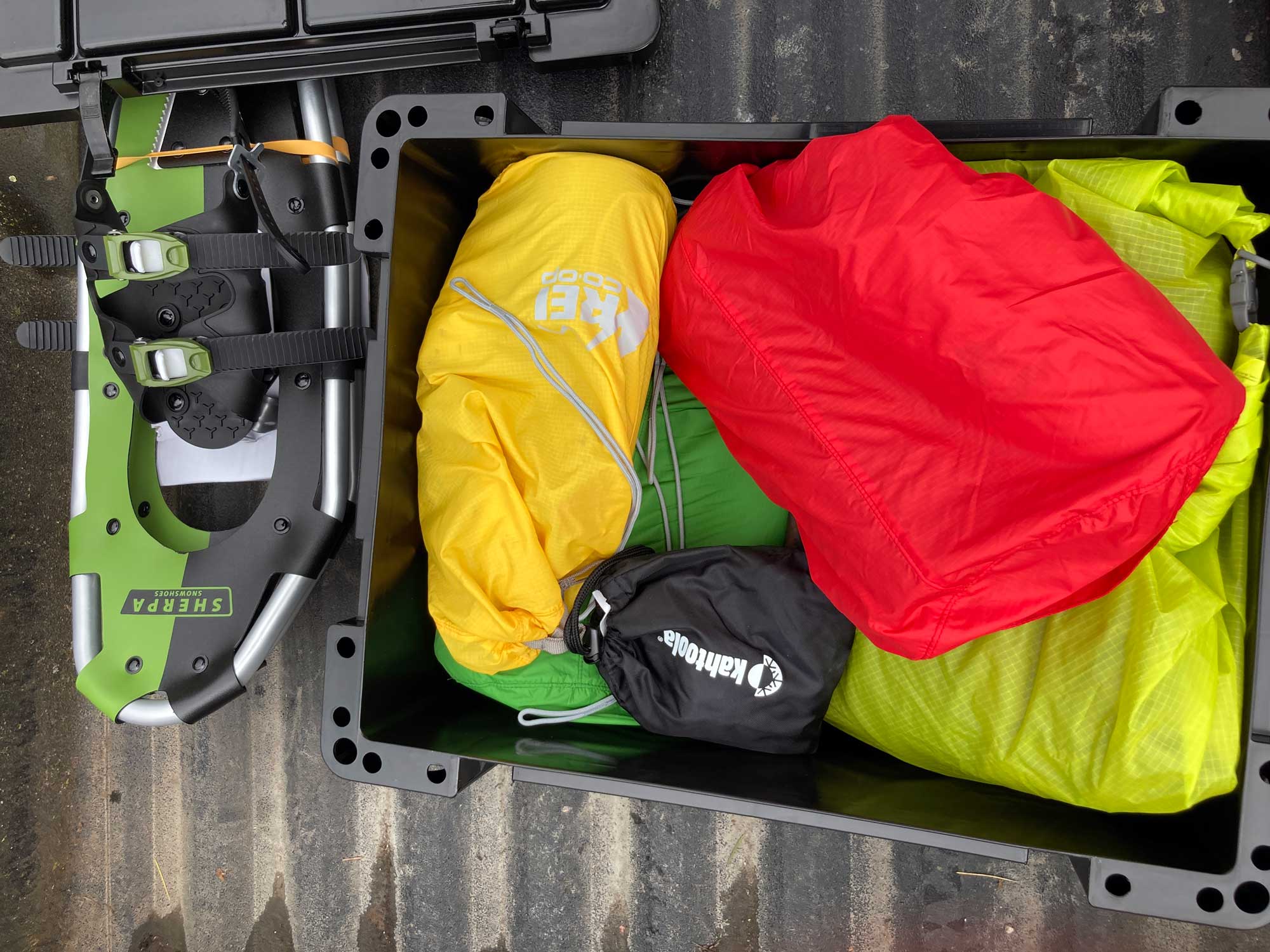 I finally arranged my gear into two kits: (1) SAR gear, indicated by a spray-painted 🔵 (because it was the only spray paint can I had that worked), and (2) vehicle maintenance and tools. I still need to pack more food rations and other general purpose gear, but it’s better than it was yesterday.

I’ll cover the details of the SAR supplemental kits in a future post, but for now, I’ll just mention that they fall in the categories of shelter, fire (including gas stove), water purification, and specialized gear (such as snowshoes). 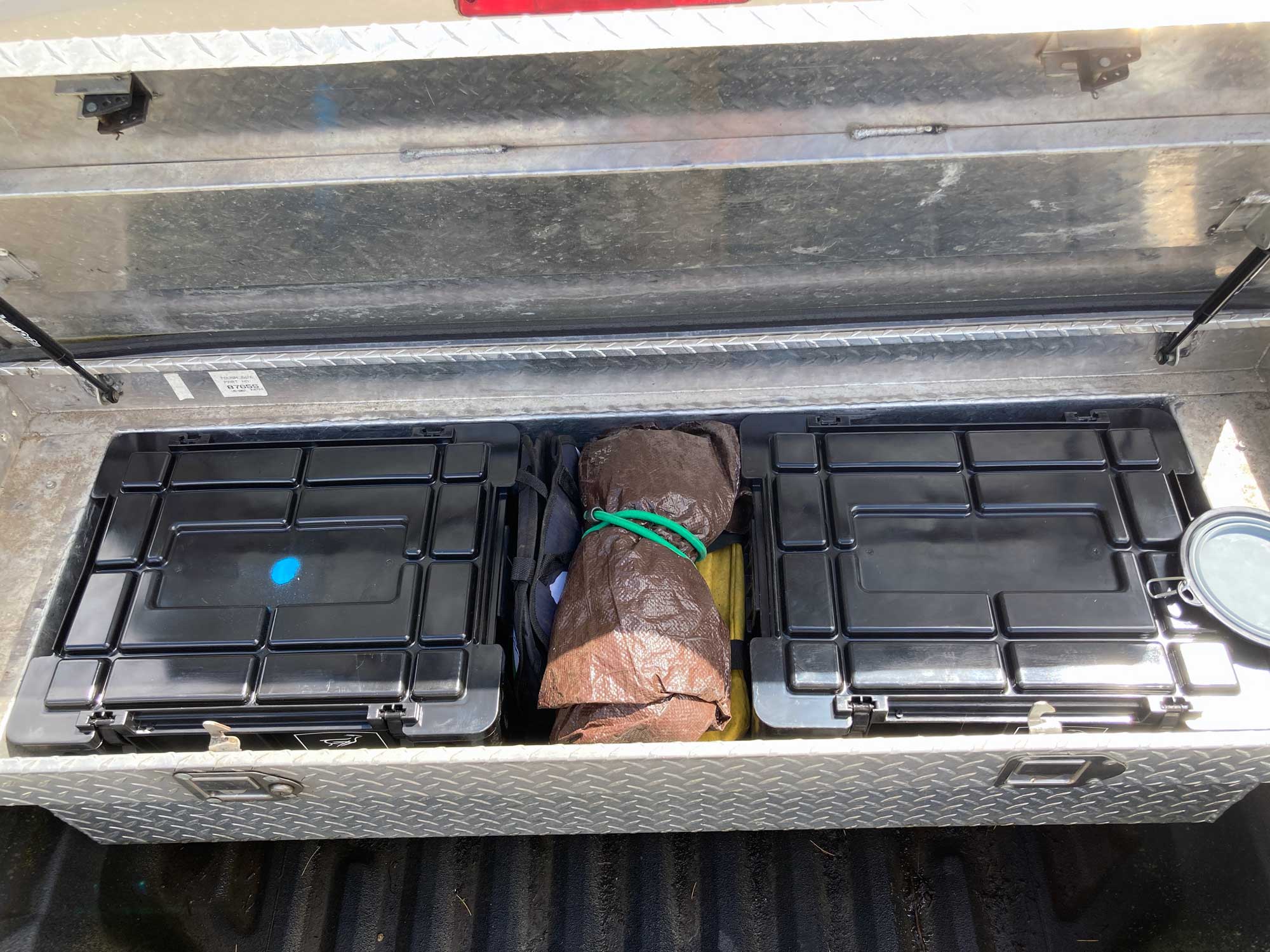 This system isn’t perfect, of course. But will I figure out how to make that old truck my a SAR vehicle? YOU BET I WILL. Until it dies. We’re rescuing all we can these days. 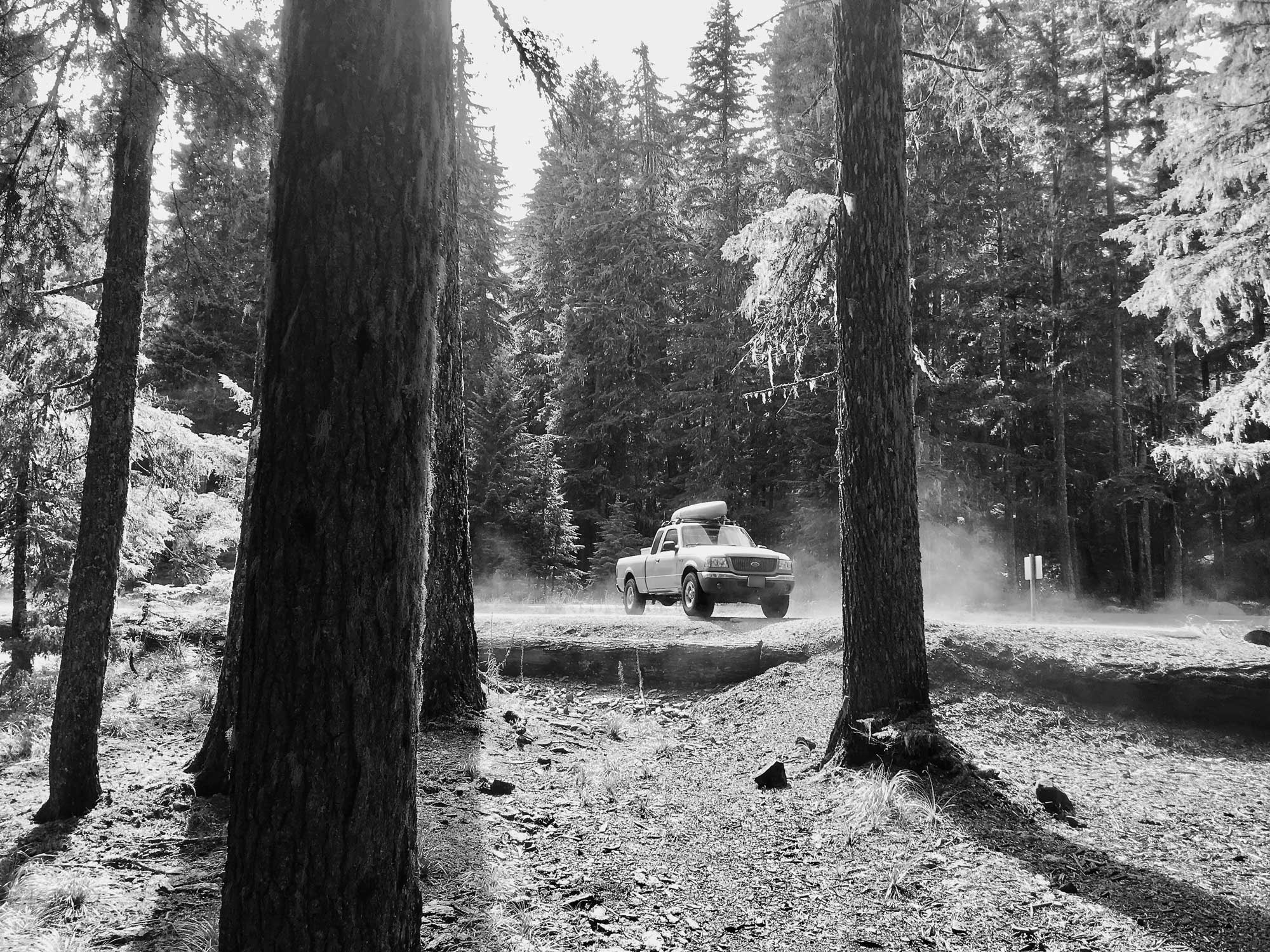